What you need to know to vote

This election is a marathon, and it’s also shrouded in confusion. We’ve received many emails asking logistical questions about voting. Below, you’ll find some basic information on what you need to have with you when you visit your local polling station to cast your ballot.

At your local polling station or Elections Canada office you must have the following pieces of information to vote:

At least ONE must have your current address on it.

There are many other options that will count as valid ID at your local office. To see more options for identification, click on this link for information.

You don’t have to wait until October 19th to vote! You can vote now or any day before then. You can find additional information that's specific to your area by following this link.

We know that this is a long election period, and a lot can happen in the next month. Sensible BC’s mission this fall is to defeat the Conservatives, and to ensure that a party with a progressive marijuana policy forms government. Make sure that you take the time to vote, and contact info@sensiblebc.ca if you’ve got questions about how to get involved in the election period or additional inquiries about voting.

Together, we can make marijuana legal and stop the criminalization of users in Canada

Health Canada threatens to send in the RCMP

Health Canada recently sent cease and desist letters to several dispensaries across the country notifying them that they must shut down their operation or have their case forwarded on to the RCMP for "enforcement action." Here is a copy of letter to dispensaries (with the business names removed).

We're almost three weeks into the election now, and we've been working hard to ensure we're well prepared for the long days that we have ahead of us in this historic election period. This is Canada's longest federal election campaign since 1926.

The length of this election period makes this a marathon instead of the usual sprint, which is exhausting for political parties, but even more so for small groups like ours that are trying to make an impact on this election.

Sensible BC remains committed to a position of non-partisanship, and our campaign is specifically focused on encouraging constituents to get out and vote in favour of progressive marijuana policy.

The impact that cannabis has on not one, but multiple illnesses is of incredible scientific and social benefit. Cannabis has been shown in some traditional medicinal practices to be highly beneficial for gastrointestinal conditions like ulcerative colitis and Crohn's Disease.

Clinical trials have found that cannabis was effective for patients with the disease, nearly half of which went into complete remission afterwards. [1] This was in addition to others being weaned completely from steroid dependency. Additionally, nearly all of the partients with active Crohn's Disease that participated in the clinical trial found that cannabis had a significant, positive impact.

Have you heard from Harper?

Recently, our Prime Minister Stephen Harper made an announcement about his party's stance on marijuana. He made several controversial claims:

We thought these claims were pretty questionable, so we did a little digging and her is what we found.

High fees and lack of access in the Downtown Eastside are two issues for cannabis advocacy group.

Sensible BC acknowledges that the City of Vancouver’s draft “Regulation of Retail Dealers for Medical Marijuana-Related Uses” is a huge step forward in the battle for marijuana reform, not only in Vancouver but for the entire country.

As Canada’s largest advocacy group for marijuana legalization, Sensible BC generally agrees with the proposed policy that will be presented to Vancouver City Council on Tuesday, April 28th.

“We really feel this is a step in the right direction,” said Dana Larsen, Founder and Director of Sensible BC. “This is a landmark policy that is the first of it’s kind in Canada, which will legitimize and protect medical cannabis dispensaries in Vancouver. We’re excited to be a part of this, and we hope that more municipalities will adopt similar policies across Canada.”

We are in the final stages of revamping our website, and are looking for images that our members and volunteers may have of canvassers and campaigners ‘out in the field’. We have some great images, but we need more!

Specifically, we are looking for images from tabling at events, street canvassing, door to door canvassing, and basic public engagement. Perhaps if you were at the conference, you snapped some shots of learning in action; perhaps you have shots from the referendum campaign at a community event - these are all gold!

As we approach the one year anniversary of the injunction to protect the patient’s right to grow marijuana, the federal government is in court right now challenging that decision.

This case is important for anyone who wants to see the end of marijuana prohibition in Canada. It’s about preserving a patient's right to legally choose how they get their own medicine. 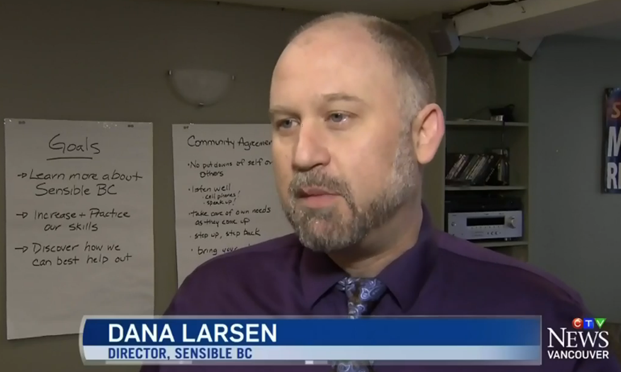 Have you seen the latest polls?

Things are not looking good in the battle to end prohibition.

Harper’s Conservatives have recently crept up in most recent public opinion polls, making him the favourite to win the next election. [1]

We know many Sensible BC supporters are Conservatives, and that’s great. We welcome and encourage a variety of voices in our movement because it makes us stronger. The problem is that the Conservatives current leadership poses the largest threat to seeing real change here in Canada.