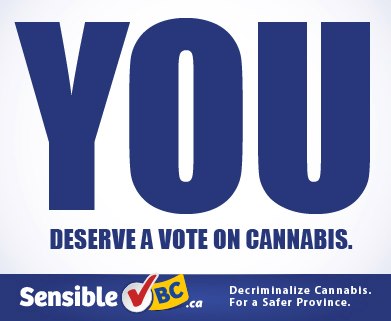 In late 2012, a few passionate marijuana advocates got together and brainstormed the best way to end prohibition in BC. We consulted with lawyers, campaigners, and organizers, and decided to push for a provincial referendum to stop marijuana arrests.

In the fall of 2013, more than four and a half thousand volunteers worked together to collect over two hundred thousand signatures from citizens across the province in 90 days.

We knocked on doors, stood on street corners, and changed the conversation around marijuana reform. And though we did not meet the very high bar set to have a referendum, our team of volunteers and community leaders have become the largest marijuana policy organization in Canada.

Over the past year, we've been putting on community training sessions, public rallies and days of action to keep pushing this issue forward. Legalization is closer than ever, but we still have a lot of work to do!

In 2015 we have a huge opportunity to change marijuana laws in Canada. This gives us the opportunity to broaden the conversation about marijuana at the federal level, and to use our grassroots network to help elect marijuana friendly politicians in key battleground ridings across BC.

This is going to be an important election, and we are going to help change the political landscape in Canada. Please join us in our campaign to end marijuana prohibition. Let’s make history, together!

Follow this link to register with Sensible BC today.