Here’s our strategy: we are building teams in key "swing" ridings in BC, determining the most electable anti-prohibitionist candidate, and activating our people to ‘grow the vote’ in those ridings. Many of our members, supporters, and volunteers have not been inspired in the past to participate in the political process, so we have an opportunity to activate new voters in a meaningful way.

The basic idea behind strategic voting is to determine who the most likely ‘progressive’ candidate is, and support them. With more than one progressive party in Canada, the challenge is to make the best choice to defeat candidates who oppose marijuana reform - and that will mean different parties depending on the riding. 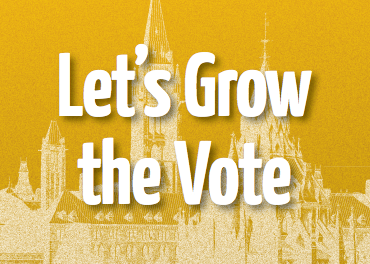 We often get asked why we don’t just back the Liberals, as they have been such advocates for legalization over the last couple of years. Well, first and foremost, we have members from all the major political parties - shockingly, even the Conservatives - within our membership, and we want to represent them.

Most importantly, we need to be able to push all parties on their positions - in the run up to an election, the election period, and after our new government is formed.

To make this happen, we need your help. Elections are a powerful tool but we need to get organized now, to make sure that we can have an impact.

Here are 4 things you can do right now to get involved:

1)Sign up today: We need to be able to keep our supporters informed on what is happening in their area. Sign up today and we'll keep you in the loop.

2) Register to vote: Every single vote counts in the upcoming election, in order to have an impact you need to be a registered voter. Click here to register to vote right now.

3) Volunteer: Follow this link and sign-up as a volunteer. As a small grassroots organization, volunteers are the key to Sensible BC's success.

4) Take the Lead: Help us organize teams in your community. Go to our Organizer page and let us know how you want to get involved.